Above image: Mr.George Kent and myself in 1989 and Mr. Kent when he was with the RCMP. Image courtesy of the RCMP.

I don’t use the term hero loosely. While a small four-letter word, “hero,” has a lot of meaning for me. According to dictionay.com, there are six meanings for the word hero. The one I am referring to is “a person noted for courageous acts or nobility of character.” I have known quite a few people who have performed courageous acts and have a noble character. All of them have worn a military uniform.

George Kent was one of them. But unfortunately, I wouldn’t learn about his “courageous acts or nobility of character” until I read his obituary. It was four years after he had passed away and 34 years after I first met him.

Growing up, Mr. Kent was the school crossing guard. I met him when I was in Grade 3, attending Robertson Elementary School in Chilliwack, BC. Everyone knew Mr. Kent. Our school only went to Grade 4. Once you were in Grade 5, you transferred to the Annex., which meant I didn’t see Mr. Kent daily. After my friends and I moved on to Grade 5, we would bike up to his post at the crosswalk or stop in the Kent’s house.

Mr. and Mrs. Kent would give us cookies and milk, set up the croquet, play cards with us, or we did crafts. We were all latchkey kids. While I write this, I am amazed at how generous and giving the Kent’s were. Sadly, Mrs. Kent passed away two weeks after Mr. Kent. They were married for 62 years.

My family moved away when I was in Grade 8, and I didn’t see Mr. Kent for years. When we did meet again, I was in Grade 11, and he was a marriage commissioner. I would join him on the odd Saturday to keep him company and be his assistant. We would go from wedding to wedding. He would marry couples. Then we would get in the car and travel to the next wedding. Some days there were three weddings, other days five.

While driving to the weddings, we talked about family, school, history, and politics. Unfortunately, I don’t recall him talking about his time in the service. Still, he did share with me that he had the opportunity to return to Europe, the Netherlands, or Belgium, I can’t remember, on a Veterans Affairs Canada Trip. He participated in a parade where he marched in the town where he had been years before when he helped liberate it during the Second World War. I remember tears in his eyes, and he was emotional as he recalled the trip. I think tears and emotions were due to the gratitude he received from the country’s people. They were grateful, cheering for the men marching through their town years later.

You see, Mr. Kent stormed the beaches of Normandy. When he talked about liberating a country, my 18-year-old mind could not comprehend what that entailed or meant. Mr. Kent had arrived in England just before D-Day in 1944. He was 28 years old. He served with the Canadian Scottish Regiment during his time there, where he was appointed Sergeant Major of the regiment. His obituary noted that he was wounded several times. He received medals, recognizing his bravery and service.

According to the Canadian Scottish Regiment website, the regiment boarded assault ships on June 3, 1944. One company landed in Normandy on June 6th (D-Day). The company was a component of the 7th Infantry Brigade, 3rd Canadian Infantry Division. The main body, under Lieutenant-Colonel F.N. Cabledu, followed in 7th Brigade reserve. They passed through the other two battalions. “With the Scottish in the lead, the assaulting brigade advanced a total of six miles farther inland than any other assaulting brigade of the British Second Army. Its first twelve hours of action had cost the battalion 87 casualties against an estimated 200 inflicted on the enemy.”

I wouldn’t understand what “storming the beaches of Normandy” meant until I watched Saving Private Ryan. To me, these are heroes. They answered the call. Unfortunately, as time marches on, the reality is there are fewer and fewer Second World War Veterans alive. When they pass away, they take the knowledge and the memory of the Second World War with them, what they witnessed in Europe and the atrocities of war. But, more importantly, the cost of war in terms of loss and how precious peace is.

Mr. Kent returned from the war, married, served 37 years as a police officer, was a deputy sheriff, and then served in the BC Corps Commissionaires. He also volunteered with many organizations. You can read his obituary here. Unfortunately, when my husband was posted from Chilliwack to Edmonton, life got busy, and I lost contact with Mr. Kent. It is a regret I will have for the rest of my life.

This week I learned of a community in Belgium that celebrates Canada Week, the week before our Remembrance Week. During Canada Week, the community gets together to display approximately 1,000 Canadian Flags. They do this to show their gratitude for being liberated during the Second World War. Read about “Maple Leaf City” here.

In this issue, we also have 50+ War Movies recommended by our readers. A couple of years ago, on our social media channels, we asked our readers to share war movies or shows that depicted war best. The call was answered. More than 50 movies were shared with us. You can view them here.

There are many victims in war, and often they are our own. If you have not heard of the Last Post Fund, I encourage you to read No Veterans denied a dignified funeral and burial. The Fund has been around for almost a century, and it ensures our Veterans who may not have the funds for dignified burial do.

With Remembrance Week here, it means it is that time of year to adorn a poppy. Last week the Governor General kicked off the Royal Canadian Poppy Campaign. You can read about it here. If you have already lost a few poppies, check out 10 tips to keep your poppy on this year. Another option is to purchase a digital poppy. I chose this option as I constantly lose poppies.

Also, earlier this week, the Royal Canadian Legion announced this year’s Silver Cross Mom, Candy Greff. You can read about her, her son, MCpl. Byron Greff and the significance of the Silver Cross Mom here. Also this week, His Majesty’s Canadian Ships (HMCS) Summerside and Kingston returned home from a six-month deployment. Read more here.

And just a reminder, it is that time of the year again, time to fall back. I find this one easier than springing ahead. You can read about Daylight Saving Time, its link to Canada, and tips to adjust to it.

Plus, don’t miss our recipe of the week, Sweet Potato Thai Soup. It is delicious!

Pax Tecum (peace be with you)

Check out the Ezine here. 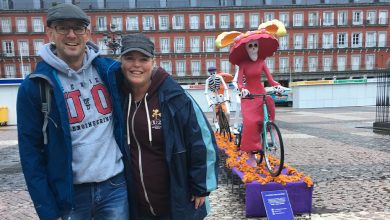 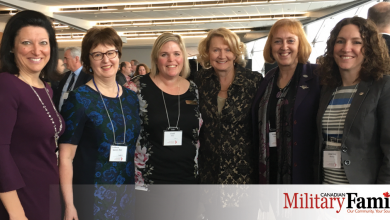 No Life Like It: Mistakes, Typos and the Roads We Travel