The Acting Chief of the Defence Staff (ACDS), Lieutenant General (LGen) Eyre, released a letter to the members of the Canadian Armed Forces (CAF).

He began by addressing the one-year milestone that just passed; the World Health Organization officially considering COVID-19 a pandemic.

“We continue to live in a dynamic and unpredictable environment and recent events have added to the uncertainties we face.

“As your Acting Chief of the Defence Staff, I view my primary role as continuing to provide our nation a force that delivers operational excellence in a manner that is reflective of Canadian identity and values and which Canadians remain proud,” Eyre stated.

In this letter, Eyre identifies the importance of orienting members of the CAF on his four overarching focus areas of people, operations, readiness, and future capability development in order to guide collective efforts.

The CAF is at an inflection point with its culture, says Eyre. Recent sexual misconduct revelations and allegations have shown how much work needs to be done. Societal problems of racism and hateful conduct have continued to manifest themselves in the organization as well, stated Eyre. He expressed that there’s a need to view the current crisis as an opportunity to do better.

External Actions: The CAF will fully support and welcome an external review of the institution and its culture with the full realization that they do not have all the answers. In addition, the CAF will embrace external recommendations, including an independent reporting chain.

Internal Actions: While the first stream takes shape, the institution is taking some important immediate steps while retaining the ability to incorporate its recommendations. This plan is still developing and is Eyre’s personal focus. “Firstly we must listen – to our own people at all levels, most importantly at the grassroots; and to external experts. From them we must learn and guide our actions accordingly,” Eyre explained.

Several actions that are already clear were outlined in the letter. One of them is closing out Operation HONOUR, harvest what has worked, learn from what hasn’t, and develop a deliberate plan to go forward.

Eyre expressed that in these efforts, they will support victims as they come forward while at the same time respecting the fundamental right of due process for ongoing investigations.

The pandemic has been hard on the world, including CAF members and their families, and the ACDS weighed in advising members of the CAF to continue to support one another and make maximum use of the coping tools and resources available. 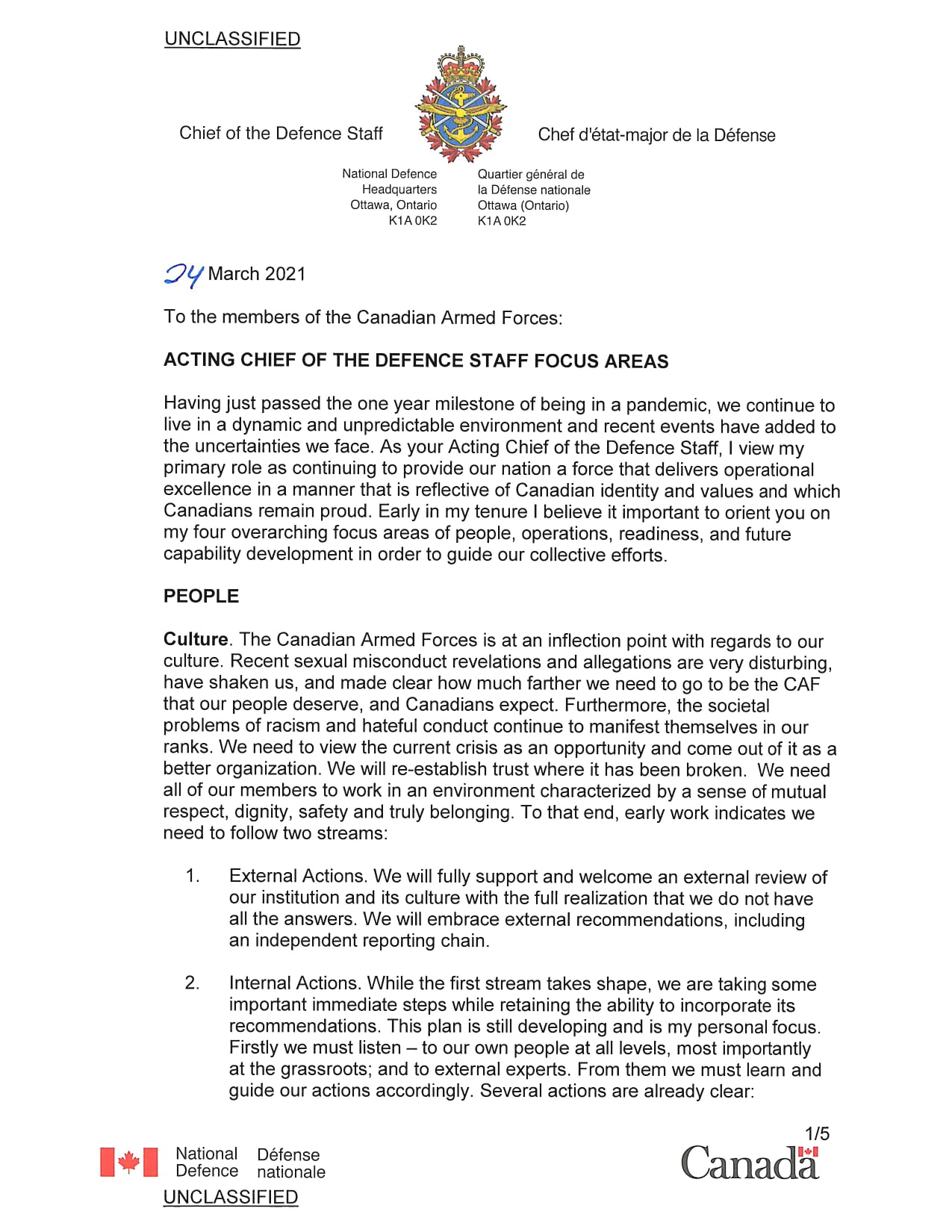 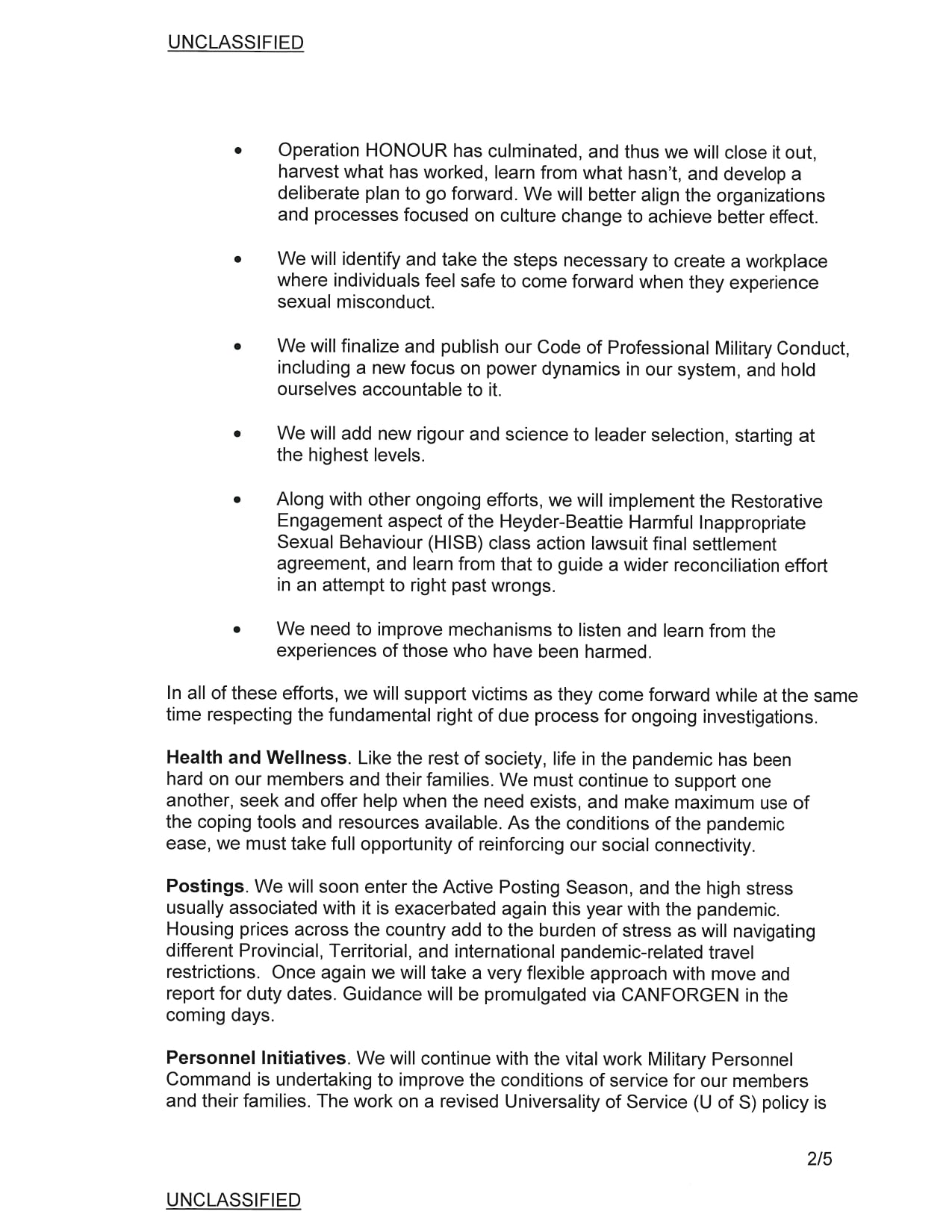 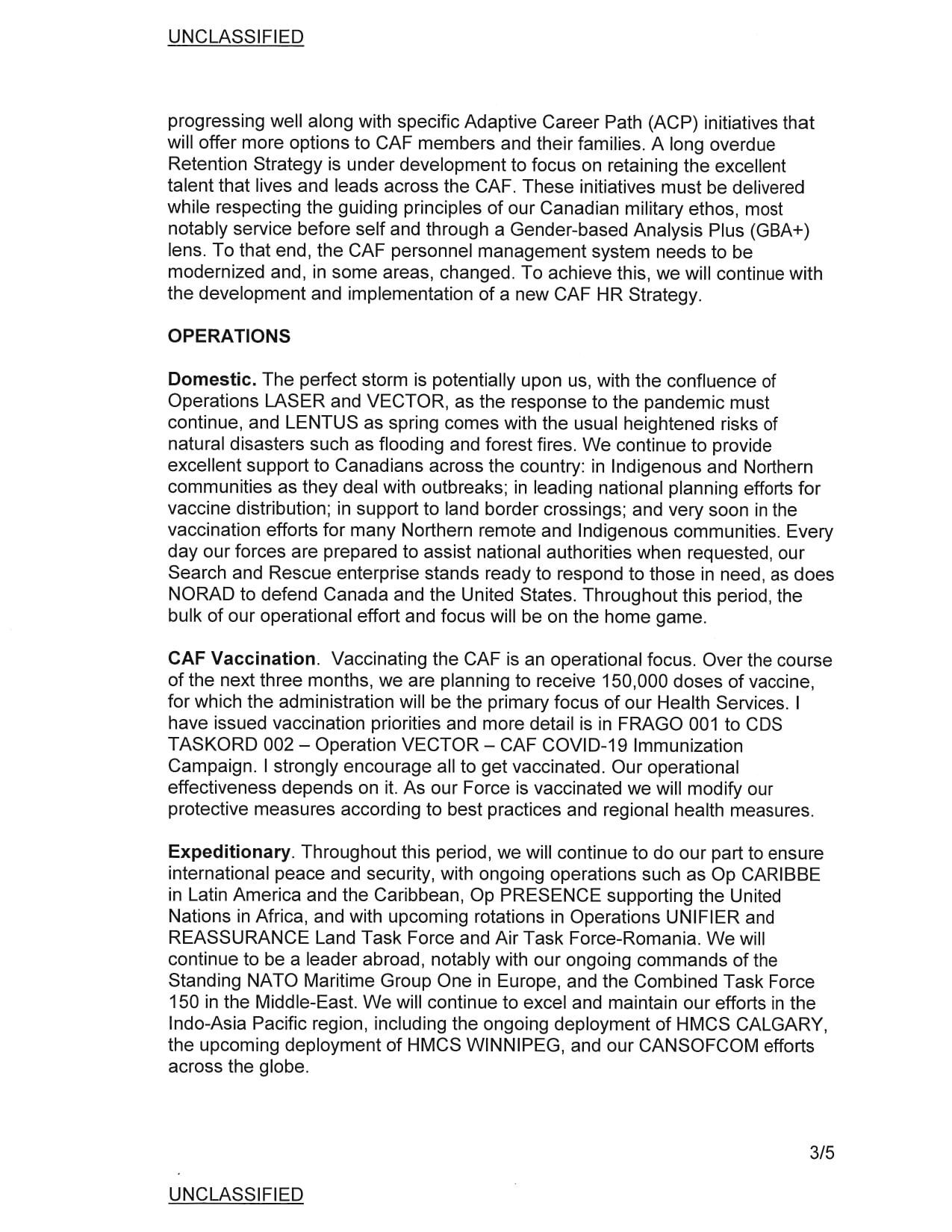 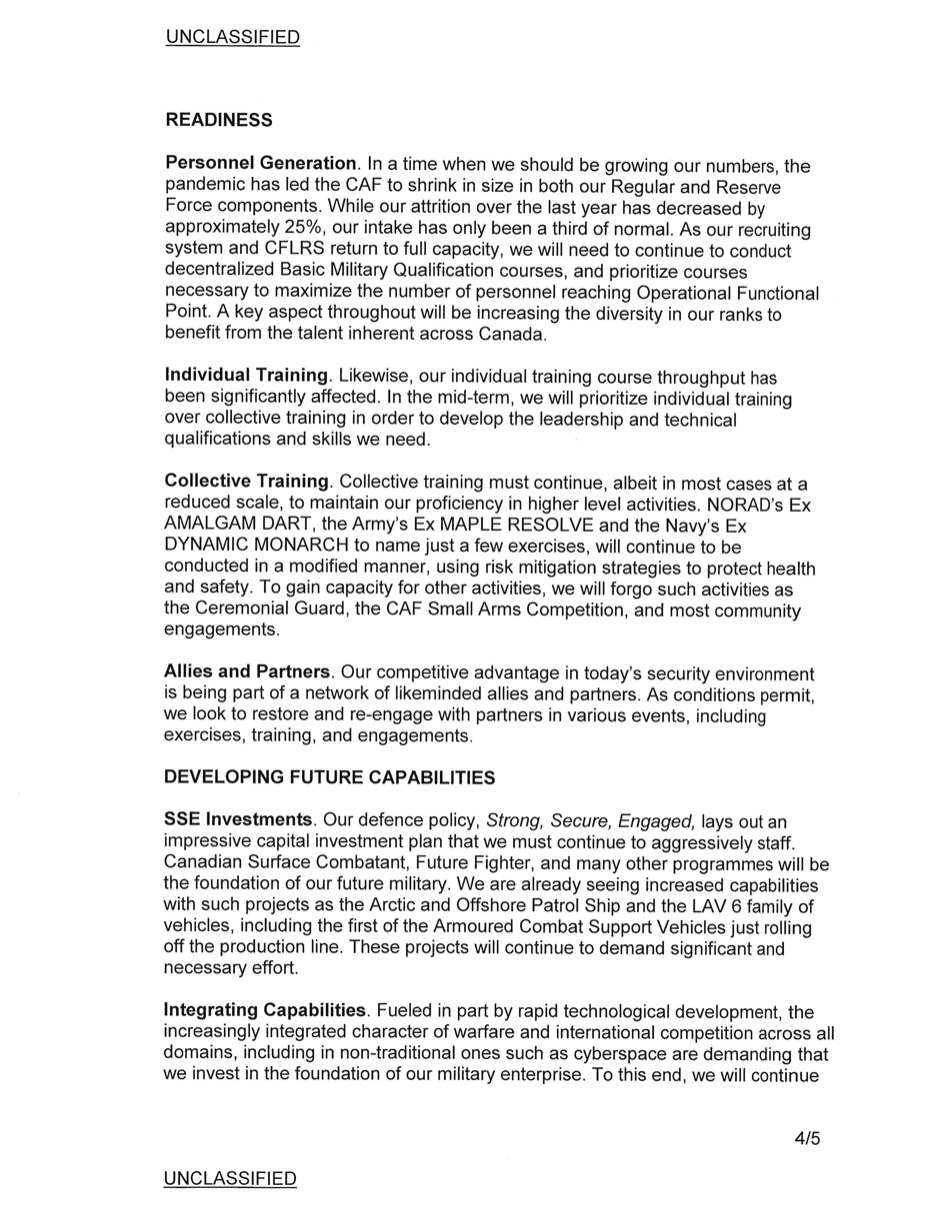 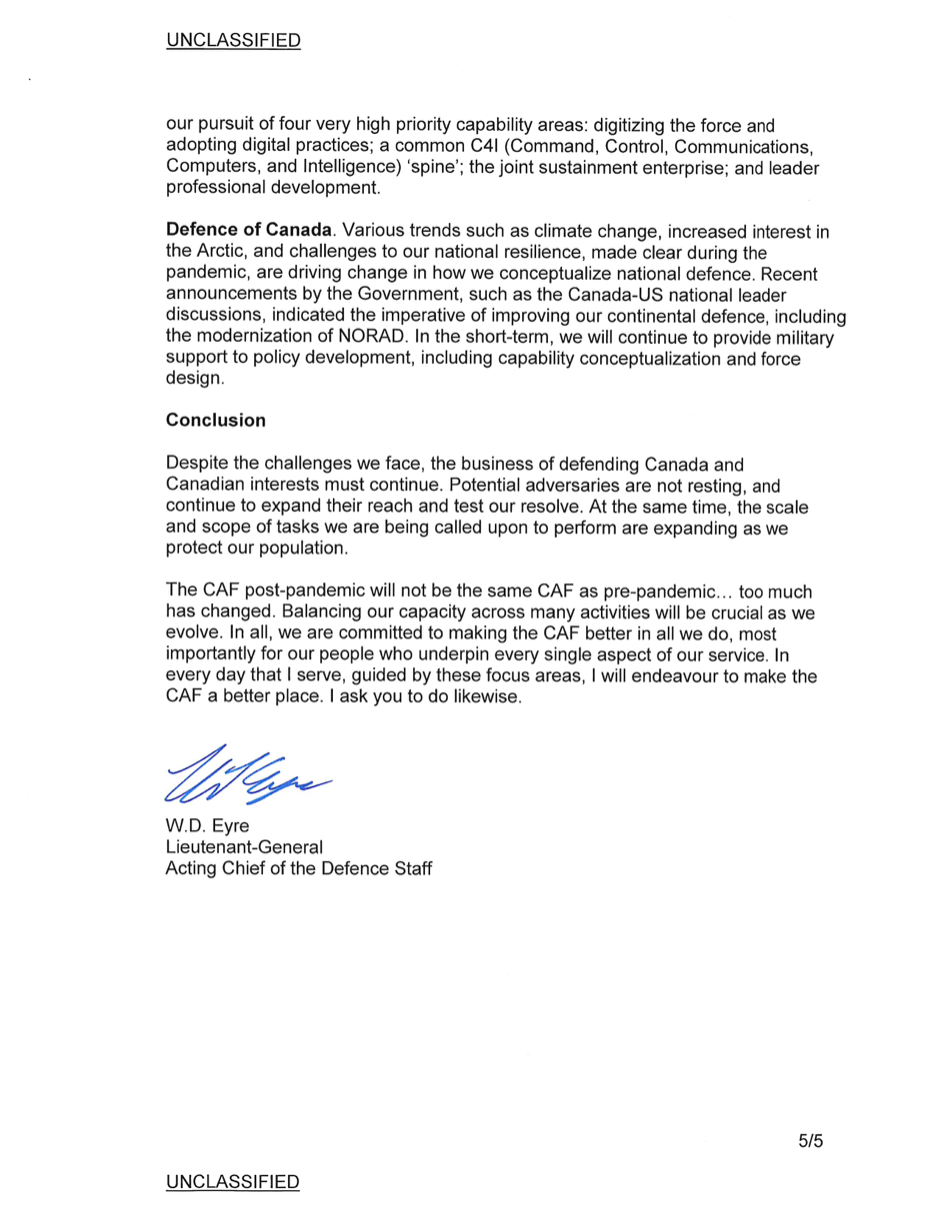 The ACDS’s letter also informed the CAF would once again be taking a flexible approach with move and report for duty dates. Guidance in navigating the rise in housing prices and pandemic-related travel restrictions will be promulgated via CANFORGEN in the coming days.

Military Personnel Command is undertaking vital work to improve the conditions of service for CAF members and their families, noted Eyre. He wrote about a Retention Strategy that is currently in development that will “focus on retaining the excellent talent that lives and leads across the CAF. These initiatives must be delivered while respecting the guiding principles of our Canadian military ethos, most notably service before self and through a Gender-based Analysis Plus (GBA+) lens.”

As a result, Eyre stated the CAF personnel management system needs to be modernized and, in some areas, changed.

On the topic of operations, the ACDS had a lot to say, focusing on vaccination/distribution, national planning, and maintaining efforts across the globe.

The CAF is supporting Canadians in Indigenous and Northern communities as they deal with outbreaks, and soon the CAF will assist in the vaccination efforts in those communities.

Eyre noted, while the CAF is prepared to assist national authorities when requested, “throughout this period, the bulk of our operational effort and focus will be on the home game.” That being said, The CAF will continue to do their part to ensure international peace and security, with ongoing operations, commands and in ensuring they maintain efforts across the globe.

Vaccinating the CAF is an operational focus, and Eyre strongly encourages everyone to get vaccinated as the CAF’s operational effectiveness depends on it. Over the next three months, the CAF is planning to receive 150,000 doses of vaccine, and administration will be the primary focus of their Health Services.

Eyre also noted that the convergence of Operations LASER, VECTOR, and LENTUS would create a bit of an ordeal as the pandemic response must continue, with the added response needed for the potential natural spring disasters.

The pandemic has led the CAF to shrink, and collective training has mostly been done at a reduced scale. While the CAF’s attrition over the last year has decreased by approximately 25 per cent, their intake has only been a third of normal.

To gain capacity for other activities, the CAF will forgo such activities as the Ceremonial Guard, the CAF Small Arms Competition, and most community engagements.

The increasingly integrated character of warfare and international competition across all domains “are demanding that we invest in the foundation of our military enterprise,” Eyre continued. “To this end, we will continue our pursuit of four very high priority capability areas: digitizing the force and adopting digital practices; a common C4I (Command, Control, Communications, Computers, and Intelligence) ‘spine’; the joint sustainment enterprise; and leader professional development.

Climate change, increased interest in the Arctic, and challenges to national resilience made clear during the pandemic are driving change in how we conceptualize national defence commented Eyre.

Recent announcements by the Government indicated the imperative of improving the CAF’s continental defence, including the modernization of NORAD. In the short term, continued military support to policy development, including capability conceptualization and force design, will be provided.

Eyre’s closing statements dove into the importance of balancing the CAF’s activities capacities and staying committed to making the CAF better. He says, “The CAF post-pandemic will not be the same CAF as pre-pandemic; too much has changed.”

Organization's objective to train and place veterans in tech field