I was 19 years old when I first travelled on the Macdonald-Cartier Freeway, more commonly known as the 401. It is fast, overwhelming and has a lot of lanes that run through what my husband calls the “centre of the universe” – Toronto.

The 401 runs from the Quebec border down to the border crossing into Windsor. It is over 800 kilometres long and depending at what speed you travel, takes several hours to drive.

Outside of Toronto the 401 can be a pleasant drive, especially travelling from Toronto to Ottawa; albeit there is a lot of traffic and lots of large transport trucks, which take away from the rolling hills, farmland and the calm shores of Lake Ontario. Nevertheless, it is a scenic journey through Eastern Ontario.

However, on the afternoon of December 30, 2008, when I looked to the east, toward Kingston, the flashing lights of the police cars caught my eye. There were rows of them, one in each lane and behind them oncoming traffic was stopped.

As the three hearses carrying Private Michael Freeman, Warrant Officer Gaétan Roberge and Sergeant Greg Kruse proceeded over the overpass leaving Trenton and heading to Toronto, I was stunned to see the highway was shutdown. I remember looking over at Jill and through my tears telling her “they have shut down the 401”.

It was a bitterly cold day, but that didn’t stop people from coming out to pay their last respects to Canada’s fallen. They might not understand the families’ loss, but they were out there braving the cold to show those who had just celebrated Christmas but now faced the grim reality that their loved one was gone, they cared.

As we merged onto the highway heading towards Toronto, the highway was completely empty, barren. On each the side of the highway people had pulled over their vehicles and as the funeral motorcade screamed by them, they saluted, waved or waved a sign. The fallen soldiers were now on one of the final legs of their long journey home to their final resting places.

Since I had known Jill she had been adamant about never travelling on that portion of the highway, the Highway of Heroes. She would drive great distances to avoid travelling on it, and to be sitting across from her as she faced her greatest fear was devastating for me. She was my deployment partner, my fire-team partner. She was now alone. A widow. Single parenting three beautiful girls.

As Jill and her 11-year-old daughter Kari waved to the people who had waited hours on the side of the road, highways, overpasses, I wept.

I remember asking Jill how could she be so together, to wave back and she quickly pointed to the portrait of Greg she had brought with her. They were there for him, to honour him, and by waving back she was acknowledging them. Thanking them. As we proceeded towards Toronto the number of people grew. More and more people were packed onto overpasses, in the parking lots and on the side of the highway.

In what seemed like hours later, the motorcade exited the highway speeding towards the heart of Toronto, to its final destination: the coroner’s office. I realized as we sped through the first red light, then the second, we weren’t stopping. Canadians of all shapes, sizes and colours lined the streets of Toronto, holding signs that simply read: Thank You Private Greenfield, Sgt Kruse and WO Roberge.

One memory that still strikes me today is of a transport truck driver of East Indian decent. He had pulled over and as the hearses proceeded past he stood along side his rig holding his ball cap over his heart. For me, the fact that he stopped and waited to honour our fallen still warms my heart. In all my years as a military spouse I had never seen anything like the support Canadians were showing for their soldiers and their families.

At that time the families were at the beginning of their long journey of grief and as they watched the hearse carrying their loved one drive into the coroner’s parking garage, nothing could prepare them for what laid ahead as their deployment would never end.

I believe, if only for a moment in time and maybe the last time, the families of the fallen that day felt comfort after participating in the heartbreaking task of attending their beloved son’s, brother’s, spouse’s and father’s repatriation ceremony. They felt comforted by the support they received from Canadians who suited up, showed up and supported their military families.

Love them or hate them, MFRCs are ours 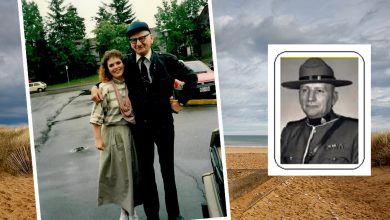