Tearing down the barriers surrounding mental health for six years, the annual Bell Let’s Talk Day is on Wed. Jan 27. As a longstanding partner of the initiative, the Canadian Armed Forces will be hosting a panel discussion on mental health on Jan. 27 at Garrison Petawawa.

“We need to continue to talk about mental health and illness to break down that stigma, so people understand what people are experiencing when they’re going through bouts of difficulties with their mental health. I think that’s really important to get that out there,” said Maj. Michele McCashion of 2 Field. Ambulance, Garrison Petawawa and one of the panelists.

The discussion is said to be “an open and honest conversation” about mental health topics mainly surrounding mental health programs and services for military members and their families. The panel will be answering questions posed via social media or by the audience.

Military members and their families are encouraged to attend the discussion and seating is being arranged for approximately 900.

As a social worker and someone actively working in the mental health field, McCashion welcomes the opportunity to share programs and services available for CAF members while, at the same time, breaking down barriers.

“I hear a lot of times they [military members] talk about going to mental health services as the ‘walk of shame.’ I guess the real message I want to get out there is that people do come forward and go to mental health services and they do get better. So, actually, people should be holding their head up high and say they’re doing something positive for themselves…,” noted McCashion. 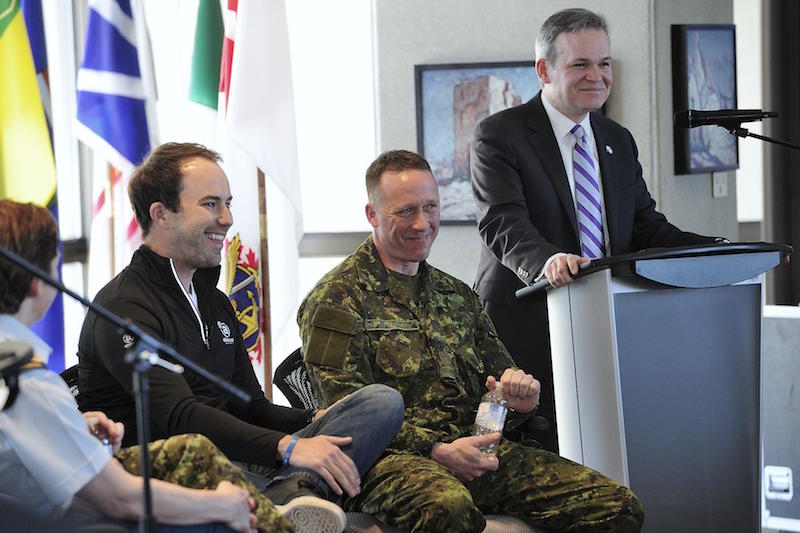 She also hopes that military members and their families will learn that there is help and resources available all across Canada at every Care Delivery Unit (CDU).

Moderator, Kevin Newman also agrees that the panel will help military members to learn about the services out there for them.

“I think it’s important for them to know where improvements in care are being made, what’s available to them and to know that the senior officers care and are concerned,” said Newman, an avid supporter of military members and veterans.

Newman, recently featured in the holiday edition of the Canadian Military Family Magazine, opened up about his support for veterans, hopes that this discussion can “build on comfort with the conversation.” He also believes the Bell Let’s Talk Day is changing Canadian society, on a whole, for the better.

“It’s changed how we view psychological distress because it’s encouraged a conversation about it, especially among high functioning individuals who may be struggling and hiding their issues. Strength comes from accepting you need help when you can’t handle it on your own any more. It’s re-defined what it means to be mentally strong by making it okay to admit when you’re not,” noted Newman.

Also in honour of Bell Let’s Talk Day, the CAF is taking part in include a social media campaign and the Chief of the Defence Staff, Gen. Jonathan Vance is scheduled to appear on Canada AM.

McCashion encourages everyone to take part in the day in some way while realizing the conversation around mental health should continue throughout the year.