This election year, Canada’s major political parties seemed to have put defence and military on the back burner while on the campaign trail, and the New Democratic Party (NDP) is no different.

Already traditionally known as a pacifist party, the NDP is not as focused on defence during this election campaign. In fact, policies on military and defence fall on the last page of their 103-page platform document.

It seems this falls in-line with the other major political parties with little to no conversation about military and defence, even in media coverage of the elections.

“It’s because when we see public opinion survey about what issues matter to Canadians, the defence ones never crack the top ten,” said David Perry, vice president and senior analyst at the Canadian Global Affairs Institute.

That does not mean, however, that the NDP leaves no room for defence policy in its platform.

Traditionally, the NDP has been known to vote against military deployments, oppose NATO, expressed concerns about increasing military integration with the US and the weaponization of space. They have also spoken in favour of Canada becoming a nuclear-free zone.

In this year’s platform as well, the NDP has specifically noted that it will “make sure that Canadian-made weapons are not fuelling conflict and human rights abuses abroad.”

However, there has been a shift in the NDP’s approach to military and defence thanks to former NDP party leader Jack Layton.

Layton, who was the leader of the party from 2003-2011, broke from tradition when he voted for the Libya mission in an attempt to make the party more centred. In the 2011 elections, he also vowed to keep the defence budget at $21 billion.

This year’s NDP platform, keeping in line with the party’s traditional views, is focused on caring for service members and their health rather than on hardcore defence spending and operations.

The platform speaks to making mental health support a priority for members and their families, reform the universality of service principle and put an end to sexual harassment and assault in the military.

NDP’s focus on service members was evident when party leader Jagmeet Singh spoke out, notably one of the few times he spoke about the military, about the recent stories on healthcare cutbacks for military members.

“The people that sacrifice their life put their life in danger to serve our country, at a minimum, they should be afforded the dignity to have access to healthcare, to retire safely. We would ensure they would get the services they need,” said Singh during a press conference last week.

It is safe to say that if the NDP is elected, there will be more of a focus on individual personnel than on large-scale global operations.

This year there are a number of NDP candidates that come from a military background. These candidates include:

For more information about the NDP and its policies, click here. 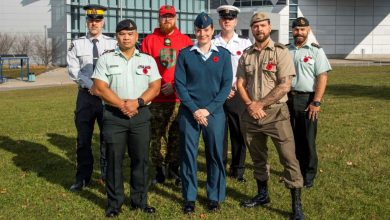