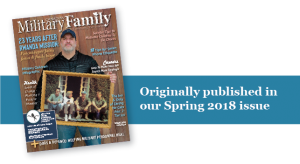 Dandelions are a flower unlike most. Besides their magical powers to grant wishes, they have the ability to make a home wherever the wind carries them. They are strong and unbreakable, blooming under all kinds of conditions.

It’s because of their similar traits that the dandelion is considered the official flower of the military child.

Just like any other child, military children must figure out the world around them and navigate school and friendships. But unlike other children, the youth of the military community have to do this with the added layer of frequent moves and long periods of separation from their parents.

But military children, like the dandelion, find a way to thrive under the circumstances. Because of their tenacity, resilience and the sacrifices they make, April is recognized as Month of the Military Child.

The Month of the Military Child was first established in 1986 by Caspar Weinberger, then U.S. Secretary of Defence. Although it is not officially recognized in Canada, the concept has gained  traction in the Canadian military community, and several Military Family Resource Centres even host special events to honour the children in their community.

Additionally, in recent years there’s been more of a push to better understand this population of the military community in order to address their needs and challenges.

The most significant recent example of this effort is seen in the 2013 Ombudsman of National Defence Report: On the Homefront. This report specifically recognizes the challenges children of the military community face including the impact on education, separation, relocation, and deployment.

Since then, a number of other organizations have stepped forward to contribute to this effort. Just last year, the Canadian Paediatric Society released a report analyzing how the paediatric community can better serve military children. This is especially important as the report recognizes that 75 per cent of military couples have children, and compared with the general Canadian population, military families have a higher proportion of young parents and children.

This report also recognized the impact relocations, deployment separation, and accessing medical and mental health services can have on children. It then made recommendations on how paediatricians and the government can better serve this community, whether it be through increasing awareness, anticipating stressors or promptly transferring records after a patient has moved.

“Paediatric care providers can support children and youth from military families by acknowledging the particular strengths and challenges they face, ensuring appropriate medical surveillance, building awareness around the services and supports available to this population and advocating for their particular health needs,” stated the report.

Because of the increasing research and awareness surrounding military children, various organizations, the Canadian Armed Forces, and organizations affiliated with the military are starting to pull together to determine the best ways to combat the challenges children face.

However, despite the statistics and challenges the children of our military community continue to flourish and succeed. For that fact alone, a moment of reflection is necessary to honour the boys and girls of the Canadian military community.