After a century of being written out of history, Lt. Col. Sam Sharpe, and Member of Parliament for Ontario North, re-enters the history books. For the last five years, MP Erin O’Toole has been working hard to correct the omission. O’Toole was met with unanimous support from all Members of Parliament to have an installation of a bronze plaque in Sam Sharpe’s name.

When O’Toole was first elected, he had known about Sam Sharpe and his story, but was unsure of how he had actually died. O’Toole began digging around for more information and later discovered Sharpe had been hospitalized for PTSD, later dying by suicide.

“There was no mention of him anywhere, and the more I looked into it, the more it was clear his colleagues had wanted him to be remembered, but he was forgotten, and it was likely because of attitudes towards mental health and suicide a century ago,” said O’Toole.

Sharpe fought in the First World War with the 116th Battalion (Ontario County), one he’d created himself in November 1915. He led his battalion to the battles of Vimy Ridge and prepared for the battle of Hill 70 and Passchendaele. Sharpe began suffering with PTSD shortly thereafter in 1917.

He wrote a letter to the widow of Lieutenant Thomas Hutchison, describing his internal battle. Lt. Hutchison and Sharpe served together in the 34th Regiment before the war. Lt. Hutchison suffered from injuries caused by a shell blast, and Sharpe tried to administer First Aid.

In his letter, Sharpe wrote, “It is awful to contemplate the misery and suffering in this old world and were I to allow myself to ponder over what I have seen and what I have suffered thro (sic) the loss of the bravest and best in the world, I would soon become absolutely incapable of ‘carrying on’.” 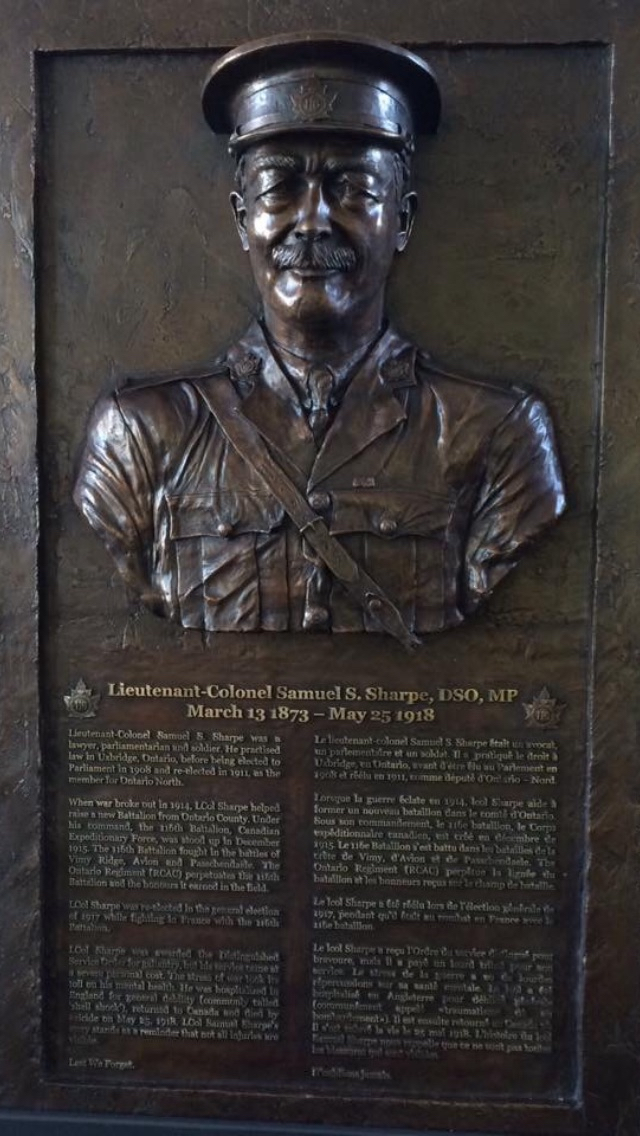 In 2013, O’Toole pushed to have Sam Sharpe remembered and used Sharpe’s story as a teaching aid. He found people could connect with Sharpe’s story and talking about it helps to reduce the stigma around mental health issues.

“These types of injuries have always been with us. Now we have treatment options that didn’t exist a century ago. The sooner people come forward to get some help and some treatment, the more likely that treatment will have success and the more likely the mental injury won’t impact other areas of your life,” said O’Toole.

On top of being a Member of Parliament, O’Toole also served with the military for 12 years and became a founding partner of the True Patriot Love Foundation, largely focusing on mental health programming.

“I did a lot of work just talking about mental health, so we could get the stigma down, make sure people got assistance, make sure we approved new forms of treatment,” he said. “Because unlike a physical injury, sometimes it’ll take two or three different types of treatment before a Veteran responds or has a positive impact. So, mental health has really been very important to me in my post-military life.”

O’Toole said Sharpe’s story proves two things. One, it’s never too late to remember someone who served and sacrificed for their country.

“Around the same time, some remains from the First World War have been found in Europe and are going to be given proper burials. It’s never too late to honour and remember sacrifice,” he said.

Secondly, Sharpe was forgotten for a time, and now he’s back and helping to spread awareness of PTSD and Operational Stress Injuries (OSI) and shows mental health injuries can strike anyone at any time.

“That’s why we have to make sure people feel comfortable enough talking about it so that they can plug into treatments. We, of course, expect people if they’re physically injured to quickly get treatment, but for many, many years, people hid their mental injuries, and that was often making them worse,” said O’Toole. “A hundred years later, Sam is now not forgotten, but remembered and his legacy is one of helping others. So, I think it’s a positive end to a story.”

You can learn about Sharpe’s life with Mathew Barrett’s comic, which is featured in Canadian Military Family Magazine. 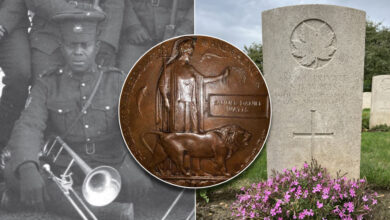