On this day 76 years ago the National War Memorial was unveiled in Ottawa to commemorate the response of Canadians who fought in the First World War.

The date was May 21, 1939 and since then the monument has come to symbolize the sacrifice of every Canadian, who served Canada, in any time of war, in the cause of peace and freedom.

“Part of the mission of the Royal Canadian Legion is to encourage remembrance. November 11 is the day the Legion remembers those we have lost in war. The National War Memorial has come to represent all the sacrifices made by veterans for their country. The memorial is truly symbolic,” said Bruce Poulin, Manager Communications, Royal Canadian Legion.

There was a sentiment in Canada following the First World War, 1914-1918 that a memorial should be erected to those who served their country, because it was a war which called for sacrifice from the people of a still young and struggling nation.

A world-wide competition was held in 1925 to choose a design for a national commemorative war monument to be erected in Ottawa.

There were guidelines; it was to be expressive of the feelings of the Canadian people as a whole, to the memory of those who participated in the Great War and lost their lives in the service of humanity.

Further stipulated in the regulations the vision the government wished to keep alive was the spirit of heroism, the spirit of self-sacrifice, the spirit of all that is noble and great that was exemplified in the lives of those sacrificed in the Great War, and the services rendered by the men and women who went overseas.

In total 127 architects, sculptors and artists resident in the British Empire, or who were British subjects by birth but residing elsewhere, or subject of Allied nations submitted entries. 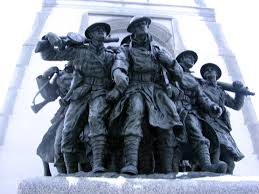 The Board of Assessors selected the model submitted by Vernon March of Farnborough, Kent, England in 1926. His theme was the Great Response of Canada, represented by uniformed sculptures from all services passing through a granite arch.

War was not glorified in his piece. March wanted to perpetuate the people of Canada who went overseas to the First World War, and to represent them, as a record for future generations.

The National War Memorial was officially unveiled by His Majesty King George VI at eleven o’clock on the morning of Sunday, May 21, 1939. In his address to an estimated 100,000 people, King George spoke of the symbolism of the memorial and the sacrifice to which it is dedicated.

“The memorial speaks to her world of Canada’s heart. Its symbolism has been beautifully adapted to this great end. It has been well named The Response. One sees at a glance the answer made by Canada when the world’s peace was broken and freedom threatened in the fateful years of the Great War. It depicts the zeal with which this country entered the conflict,” said the King.

Some say the soul of Canada is revealed in March’s piece where he has depicted Canadian soldiers and horses pressing forward through an arch. His vision was the soldiers, along with their horses, representing peace and freedom as they entered battle. For the cause of peace and freedom during the First World War 60,000 Canadians gave their lives with a larger number suffering impairment of body or mind.

“On the anniversary of this iconic monument we recognize it represents all of the women and men who have lost their lives for this country. Corporal Cirillo’s death added to the depth of sacredness of the National War Memorial. The monument represents wars, conflict, peace and ultimate service to country,” said Poulin.

Last October Corporal Nathan Cirillo was shot dead while standing guard at the National War Memorial. A single father with an big smile, friends say he had wanted to be a full-time soldier since the age of 13.

The 24-year-old was a corporal with the Argyll and Sutherland Highlanders in Hamilton, where he grew up and was raising his six-year-old son.

According to Veterans Affairs website (veterans.gc.ca) the memorial does more than commemorate events in the past. It has a message for all generations and all countries.