DND and VAC are continuing to explore ways to enhance support, programs, and services to CAF members, Veterans and their families.

“I know that the Canadian Armed Forces has highly capable and compassionate leaders, medical personnel, and others who work hard to improve our support programs and services,” said Brigadier-General Andrew Downes, Surgeon General. “They are as committed to the health and wellbeing of our military personnel as I am. The Joint Suicide Prevention Strategy will help guide this work, and will help to ease the stressors that some experience during transition to civilian life.”

Since 1996, the CAF has been tracking suicide mortality and releasing the results to the public, since 2008 and aims to better understand suicide in the actively serving CAF population.

These reports examine suicide rates, and the relationship between suicide, deployment and other potential suicide risk factors.

“When it comes to suicide, there is no simple solution or easy answer. But we must do everything we can to better understand the issue, so we can prevent suicide amongst Canada’s Veterans. This research – along with other research projects on Veterans’ well-being – will allow us to continue to improve our services and supports for Veterans and their families,” said Lawrence MacAulay, Minister of Veterans Affairs and Associate Minister of National Defence.

The Veterans Suicide Mortality Study tracked Veterans who released from the CAF between 1976 and 2012. In 2017, the study looked at suicide risk by age and sex, and developing trends over time. The same group was examined in more detail including suicide risk by component (Reserve Force vs. Regular Force), rank, age at release, reason for release, and how many years after release Veterans were at greatest risk of dying by suicide.

The Veteran Suicide Mortality Study is the second report published by VAC and is seeking a better understanding of suicide of veterans. It is an update covering the period from 1995 to 2017.

Between 1995 and 2017, there were no statistically significant increases in the overall suicide rates in comparison to non-military Canadians.

The findings from these studies, along with other ongoing research initiatives contribute to the enhancement of programs and benefits that will ultimately improve the health and well-being of CAF members and Veterans.

The published report revealed that the number one factor in suicide was work/life stressors. One hundred per cent of the Regular Force members (males) that had died by suicide had at least one work and/or life stressor including:

The report also revealed 69.2 percent of members studied, had at least three concomitant stressors prior to their death.

“Our government recognizes the sacrifices our women and men in uniform make on behalf of our country. Taking care of people is our top priority. These reports will help us further understand this issue and find effective ways to support our military members, Veterans, and their families,” said Harjit S. Sajjan, Minister of Defence.

Mental health has been a topic of discussion within the Canadian Armed Forces and Veterans Affairs Canada. There are a variety programs and services available to actively serving members, veterans and their families, including the Family Information Line which provides supportive counselling seven days a week, 24 hours a day. Family Liaison Officers are also available to offer support for families coping with illness, injury, death, or special need.

Each base across Canada offers these services as well as Canadian Forces Health Services that provides mental health and psychosocial programs and services designed specifically for CAF members.

If you or someone you know are experiencing suicidal thoughts, call 911, or call the National Suicide Prevention Hotline at 1-800-273-8255.

Visit the Department of Defence website to read the report.

Visit the Veterans Affairs Canada website to read the report. 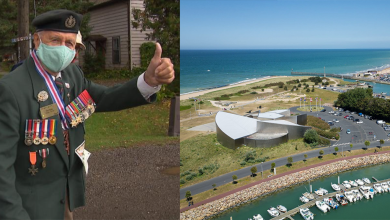