CFB Edmonton has opened its doors and its hearts for Ortona the Labrador mix.

A pup of just five months, Ortona has been brought to the base for training to ultimately become a service dog for military members diagnosed with PTSD.

Ortona was born on Feb. 8, 2016, in Ontario and flown out to Edmonton in the spring to start training with Capt. Donna Riguidel.

Ortona will live with Riguidel for the next 18 months to two years. Riguidel’s main duty is to take the canine anywhere and everywhere possible.

“That individual [puppy raiser] is expected to take them out into the community in all difference scenarios, different organizations, shopping, any place they go with the idea of exposing the dog to a variety of stimuli, and people and everything so that when it comes time to assess the dog they are the most adaptable they can be,” explained Riguidel.

Ortona goes to work with his trainer everyday, often spending the day sleeping under Riguidel’s desk on a cushion or on the cool floor. The two are frequently invited to visit different organizations, companies or attend different meetings for exposure. The Labrador has even spent the day with Riguidel’s daughter in junior high.

CFB Edmonton welcoming a service dog candidate for the first time ever, was prompted by a controversy earlier this year. It was noted that a number of dogs that were working alongside Canadian Armed Forces members transitioning out were actually not considered service dogs under the Alberta Service Dog Act. To be considered a service dog in Alberta, a dog must be Assistance Dog International (ADI) certified. 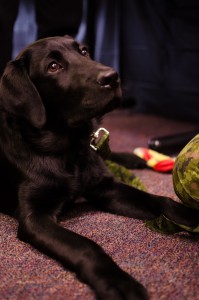 Riguidel started to look into a way to assist military members with OSIs while adhering to the province’s laws and came across National Service Dogs out of Cambridge, Ontario. National Service Dogs is the only school in Canada that trains dogs to help those with PTSD and is ADI certified.

Riguidel decided to become a puppy raiser in hopes of training a dog to ultimately help a CAF member with PTSD.

Ortona’s arrival in Edmonton has played a huge role in educating the community.

“We have a big social media push behind this dog. It helps to educate people a little bit about what goes on base; but also, as far as helping educate people about the idea of service dogs in Alberta, that people in need can get actually get a service dog through schools that are ADI certified without any initial costs. The dogs are actually given to people in need, so they don’t have to go out of pocket,” said Riguidel.

At the end of the two years, Ortona will go back to National Service Dogs for assessment and based on that will receive further training to assist either those with PTSD or with Autism.

Riguidel says that Ortona’s presence has brought cheer both to her home and the workplace, often adding a relaxing atmosphere to meetings.

“It’s definitely rewarding. It’s a little bit heartbreaking to know at the end of the two years he’s going away but at the same time it’s sure fun while he’s here,” stated Riguidel.