In the aftermath of devastating flooding that hit the National Capital Region, more than 1,000 Canadian Armed Forces (CAF) members have deployed over the last few days to provide support to the areas most affected.

Lead elements from the Immediate Reaction Unit made their way to Montreal on May 5 in response to the Government of Quebec’s emergency response. The following day, more than 400 members of 2 Canadian Division from CFB Valcartier were also deployed to the region. Divided into four companies of 100 individuals, the military provided support in the areas of Saint-Jean sur Richelieu, Shawinigan, Laval, and Gatineau.

Then on May 7, an additional 800 members from the 2 Canadian Division CFB Valcartier.

The troops, along with aviation assets and 12 boats from the Naval Reserve, are filling and distributing sandbags to solidify structures, helping to evacuate citizens, using military vehicles to assist civilian authorities with maintaining traffic, monitoring critical infrastructure and helping to provide preventative reinforcement to critical infrastructures such as water treatment plants and bridges.

As of Monday, more than 800 residents have voluntarily left their homes, and more than 283,000 sandbags have been distributed. Government offices were closed for a second day on Tuesday.

Although conditions have greatly stabilized in the region, the CAF remains on hand to provide any other additional support that is needed. 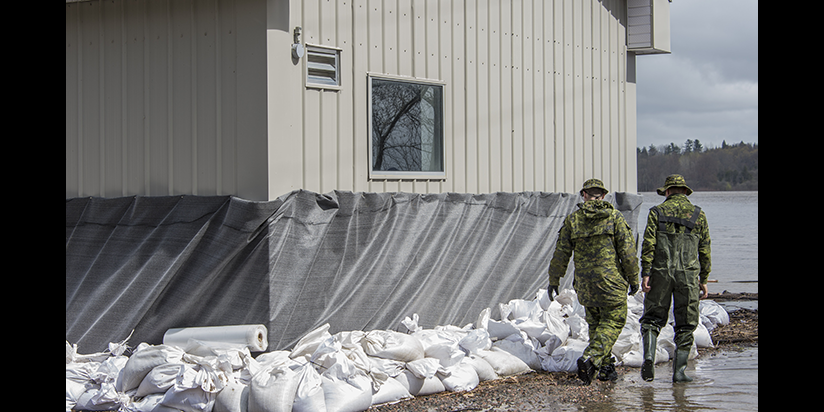 “At this difficult time for many of our fellow citizens, we are proud to support the Government of Quebec’s civilian authorities and to contribute to the management of this extraordinary situation. The role of Canadian military personnel in situations such as these is to provide support, and it is a priority. Our members are ready and will do what is required in keeping with the priorities established in conjunction with the other federal departments, agencies, and entities in Quebec to provide assistance and put our training and skills to good use,” said BGen. Hercule Gosselin, Commander of Joint Task Force East.