To celebrate the brave women who paved the way for future generations of women in the Canadian military, the Perley and Rideau Veterans’ Health Centre Foundation will host its second annual International Women’s Day High Tea, on March 5.

The event will specifically recognize the contributions of 43 women veterans who reside at the Perley Rideau Centre and served in either the Second World War and the Korean War.

“I think it’s important to recognize that these women made a unique contribution to Canadian society. As well as we want to give these women an enjoyable afternoon and raise money for the Health Centre,” said Sara Francis, Development Coordinator, The Perley and Rideau Veterans’ Health Centre Foundation.

The event is the brainchild of Maj. (ret’d) Sandra Perron, Canada’s first female infantry officer. Perron, who serves on the board of directors for the centre, was looking for a way to specifically recognize the female veterans at the centre. She will be speaking to this during the high tea.

“She will be sharing with our guests the importance of what these women did and the way Canadian society viewed what women are capable of outside of the home and recognizing their contribution paved the way for future women to enlist and be more active in different parts of Canadian society,” explained Francis.

As they enjoy their high the menu of finger sandwiches and scones, the veterans will sit at different tables to speak with guests about their stories and experiences during their service. The event will also feature performances from the Canadian Military Wives Choir and the Army Voices Choir. 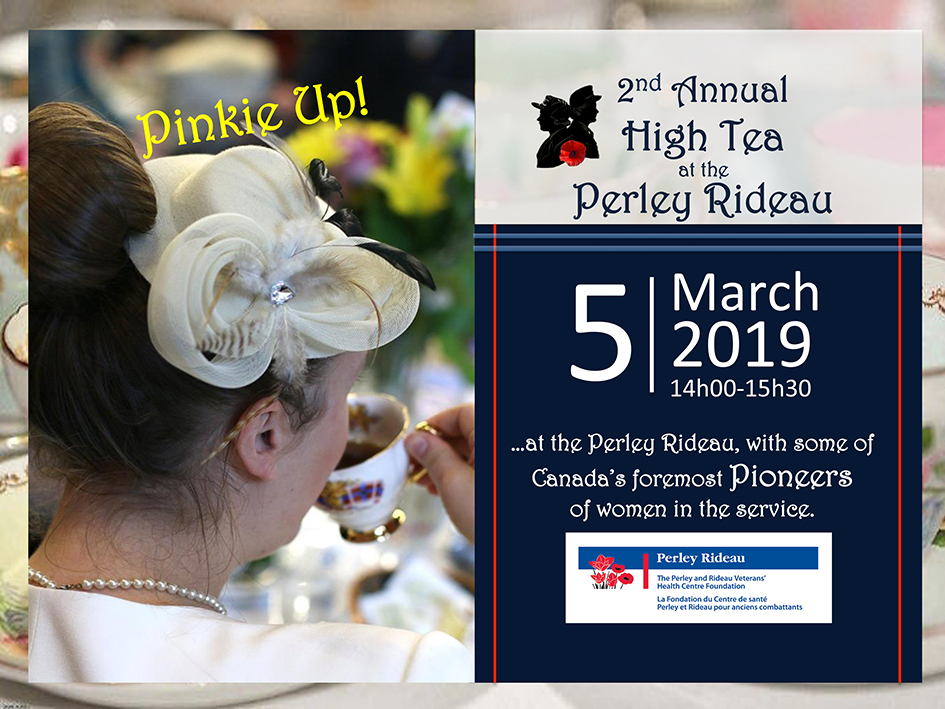 Additionally, a silent auction will be held to raise funds for the centre.

Although the event is free to attend, donations are welcome. Funds raised from the event will go towards supporting the Perley Rideau Veterans’ Health Centre and the more the close to 150 veterans that call the centre home. Specifically, the funds will go toward the well-loved recreation and creative arts programs, the purchase of 85 new high-low beds and mattresses, the purchase of 21 blanket warmers, and the renovation of the tub and shower rooms.

A donation of $50 is also encouraged to support the hand-made, blue shawls given to each of the veterans at the event. The shawls are made by a volunteer and have a poppy crotched onto them. Along with the shawl, the veterans will receive a list of all the sponsors to show just how many people recognize and thank them for their service.

“A lot of these women don’t see what they did as anything special. It was what was needed at the time and they were happy to do that. And they came back home and the vast majority, not all, but most left the service and went on to raise families. They didn’t see their service as anything worthy of recognition because the men had done so much more or they had done what was required of them at that time,” commented Francis.

According to Francis, after last year’s event the women were delighted and overwhelmed by the love they were shown and many wore their shawls throughout the year.

“I think it really helped to impress upon them that people do understand the importance of what they did and they recognize it and they do want to say thank you,” said Francis.

The Perley Rideau Veterans’ Health Centre International Women’s Day High Tea will be held March 5 from 2 p.m. to 3:30 p.m. The event is open to the public. RSVP is required by March 1.