In a statement, the RCAF noted Aircraft from RCAF Wings throughout Canada would carry these out at various times during the day.

Since COVID-19 restrictions have been put in place across the country, the RCAF encourages Canadians to mark Remembrance Day from their homes as much as they can and observe flybys from a distance while adhering to local public health guidelines.

A wide variety of aircraft will be involved in the flybys, and the different types vary depending on location.

David Lavallee, 1 Canadian Air Division Public Affairs, advised people to maintain social distancing, “First and foremost, we want to make sure that people are following whatever provincial or local health authority restrictions or guidelines are placed in their respective areas. We don’t want to put anybody in any kind of danger or elevated risk for exposure to coronavirus.”

He added that if people can see the flybys from their home, great, but in doing flybys, even if there are no gatherings or events specifically that are being flown past, it’s still a way that the RCAF can honour veterans and the sacrifices made in the past.

This can be done while maintaining a distance and not actually interacting with the communities because the aircraft are all taking off from and recovering at their own bases.

Lavallee says that wants to remind people that while it’s unfortunate, we can’t have Remembrance Day ceremonies this year in most parts of the country, they do want people to stay safe and that despite everything, the RCAF is still proud to be able to do fly pasts like this and pay respects on Remembrance today.

Flybys will take place in the following communities:

During the flybys, the aircraft will fly at minimum altitudes above the highest obstacle in their path. Flybys conducted by RCAF aircraft are carefully planned and closely controlled for public safety and are dependent upon weather and flying conditions.

For details on the RCAF and their aircraft, visit their website here. www.rcaf-arc.forces.gc.ca.

Get festive this season as we celebrate during COVID-19 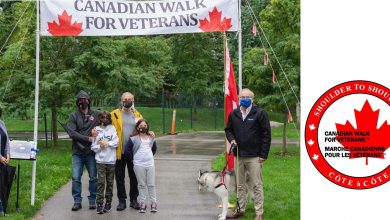